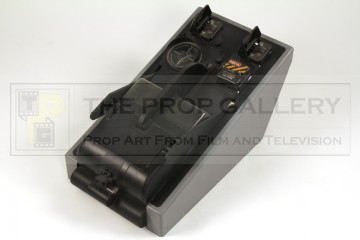 This prop instrument panel was built by noted model maker Bill Pearson (Alien, Outland) at Shepperton Studios for the production of Space Precinct, the 1994 science fiction series created by Gerry Anderson with its use undetermined. Following the production of Space Precinct Pearson retained the prop and it was reused in Series VIII of the BBC science fiction comedy series Red Dwarf where is is seen used by both Lister (Craig Charles) and Cat (Danny John-Jules) where it forms part of the redesigned cockpit in the Blue Midget craft. It was finally used in Moon, the 2009 science fiction picture directed by Duncan Jones where it appears in the cockpit of the rover piloted by Sam Bell (Sam Rockwell).

The instrument panel is constructed from painted perspex and features an imitation gyroscopic device featuring spinning lights with a lift up cover of plastic revealing an operational control lever, to the top the prop is dressed with metal control boxes which open to reveal non functional switches. The unique device measures an impressive 23" x 12" and stands 10" at the highest point, it remains in excellent production used and untested condition, wires to one other switch cut, other lacking, exhibiting only minor surface wear, overall fine. Obtained by The Prop Gallery directly from model maker Bill Pearson.

A highly displayable artefact from these popular productions and a fine example of functional prop building.