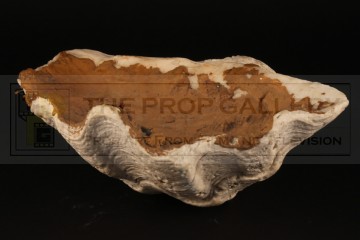 An original prop used in the production of Cast Away, the 2000 adventure picture starring Tom Hanks under the direction of Robert Zemeckis.

This large shell can be seen being used as a painting palette as Chuck Noland (Tom Hanks) takes shelter in the cave, the large heavyweight shell features applied latex to the interior and can be screen matched by its unique shape and detail.