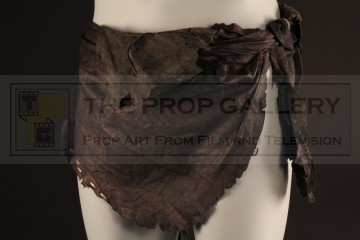 An original costume used in the production of Cast Away, the 2000 adventure picture starring Tom Hanks under the direction of Robert Zemeckis.

This is an original loincloth worn by Tom Hanks as Chuck Noland in the latter stages of his stay on the island and as he makes his escape aboard the raft, it arguably represents his signature wardrobe of the movie. The intentionally distressed loincloth is entirely custom made from leather designed to cover the genitals and buttocks, the costume features a support for the genitals to the interior with some stud detailing and a partial zip to the exterior, details which can be seen on the dress which Chuck finds in one of the FedEx packages earlier in the movie from which the loincloth is created, it fastens through a hole in one side which can simply be knotted.

The loincloth remains in excellent intentionally distressed condition and clearly saw use during the production with wear from exposure to water and corrosion to the metal zip, generally fine.