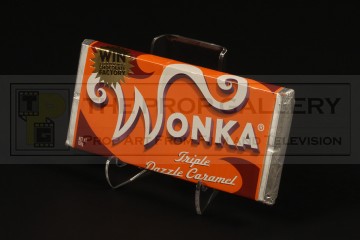 Due to the large quantity of Wonka bars required for filming the vast majority were constructed by the prop department from injection moulded plastic however for close up shots and scenes where actors were required to open the bars a small number of genuine edible chocolate bars were produced. This Triple Dazzle Caramel flavour bar is the latter, a rare hero edible version made of real chocolate intended for use in close up, the bar is wrapped in foil with a colourful outer wrapper of paper which features various nutritional information to the verso and states that it is manufactured by 'WONKA WORLDWIDE INC'. There are a number of subtle differences between the hero bars and their more common plastic counterparts including the gold star to the top left corner of the wrapper which reads 'WIN A TRIP TO WONKA'S CHOCOLATE FACTORY' is shiny and embossed rather than printed, also the bar of genuine chocolate is more substantial being slightly thicker and far heavier.

The Wonka bar measures approximately 7.5" x 3.5" and remains in excellent condition with some wear consistent with production use and handling including minor corner wear which in areas has exposed the chocolate. Please note that due to its age this chocolate bar is sold as a movie prop for display purposes only and no warranty is made with regard to its edibility as a foodstuff.

This represents a very scarce example of a hero Wonka bar and a highly displayable artefact from this well received adaptation.