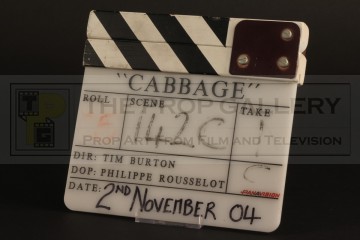 An original clapperboard used in the production of Charlie and the Chocolate Factory, the 2005 film adaptation of the famous Roald Dahl book starring Johnny Depp as Willy Wonka under the direction of Tim Burton.

This production used clapperboard is constructed from semi translucent perspex with an affixed wooden clap stick and bears the cover movie title 'CABBAGE' etched in black lettering, this a nod to the Bucket family diet. The Panavision branded clapperboard also features the names of director Tim Burton and director of photography Philippe Rousselot with space to record the roll, scene and take numbers. The board features numerous markings from it last used during the production including the date '2ND NOVEMBER 04' this hand inscribed in black marker.

A highly displayable example of the iconic clapperboard from the production of the well received adaptation.