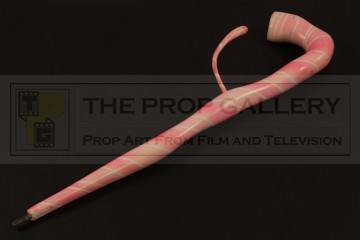 Candy canes such as this were used to dress the set of The Chocolate Room in Wonka's (Johnny Depp) factory, constructed from foam infused resin the cane features a pink paint finish with white stripes and a metal rod to the base (trimmed) used to fix the piece to the set.

The cane measures approximately 30" long and remains in good production used condition with some paint wear, one of the sprigs snapped in the hole and missing.