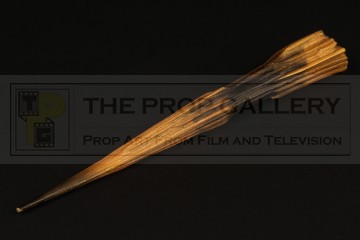 An original prop used in the production of Buffy the Vampire Slayer, the long running television series starring Sarah Michelle Gellar in the title role.

Stakes identical to this can be seen used by Sarah Michelle Gellar as Buffy in various episodes of the series, constructed from resin the prop stake would have been cast from the master which was carved in wood and features a distinctive grain tapering to a sharp point.

This represents an instantly recognisable and highly displayable artefact from this highly regarded series.