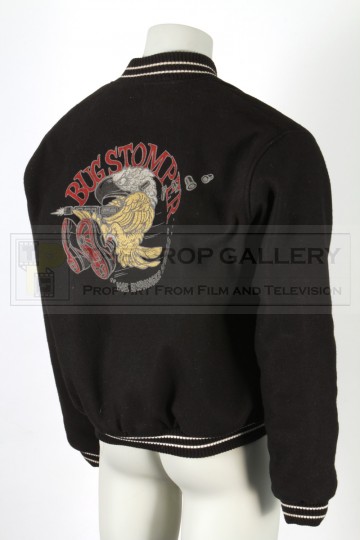 An original crew jacket from the production of Aliens, the second instalment in the popular Alien film franchise directed by James Cameron.

Jackets such as this were issued to crew members during the production with this one being the personal jacket of noted Academy Award winning miniature effects artist Brian Johnson. The jacket is constructed from wool with press stud fastenings to the front and features the same Bug Stomper artwork created by conceptual designer Ron Cobb and used as nose art for the Dropship which consists of a boot wearing eagle brandishing a weapon with the tagline 'WE ENDANGER SPECIES', to the left breast is an early Aliens logo.

The jacket is size XL and remains in excellent vintage condition with a small tear to the interior lining, otherwise fine. Obtained by The Prop Gallery directly from the collection of Brian Johnson.

A displayable artefact from the production of this highly regarded Academy Award winning sequel.