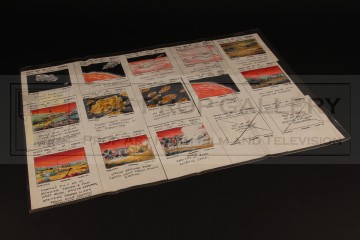 Brian Johnson hand drawn A1 storyboard artwork - All That Glisters

An original storyboard used in the production of Space: 1999, the cult science fiction series produced by Gerry and Sylvia Anderson.

From the Year Two episode All That Glisters this is an original storyboard used during the production of the visual effects work at Bray Studios. Consisting of 15 hand drawn storyboards which have been glued to black backing paper and placed in an A1 size Artcare presentation folder the work was created by Academy Award winning special effects artist Brian Johnson who was responsible for much of the groundbreaking miniature effects work on the series. Each of the immensely detailed full colour storyboards is accomplished in pen and felt tip and features episode, scene and slate numbers with a hand inscribed description of the shot below which includes details relating to camera movement. The two boards to the bottom right of the folder are simply feature hand inscribed notes instructing to set up the same as a previous shot, this to save valuable time and avoid duplicating the detailed artwork unnecessarily.

Each of the storyboards measure approximately 8" x 6.5" with the overall size of the Artcare folder being an impressive 33" x 24". The work remains in generally excellent vibrant condition with some creasing to the folder, otherwise very fine. The final images show special effects director Brian Johnson referencing similar storyboards during the production on on set during the filming of the visual effects work at Bray Studios.

This represents an incredibly rare and highly displayable example of original artwork from this acclaimed science fiction series which remains highly regarded for its outstanding miniature effects.