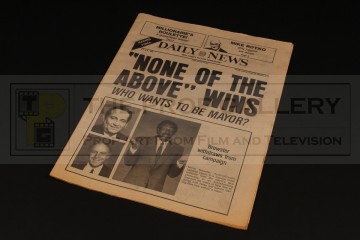 An original newspaper created for the production of Brewster's Millions, the 1985 comedy starring Richard Pryor and John Candy.

This newspaper was created by the production to be used in the scenes near the end of the movie where it is announced that the "none of the above" campaign has been successful, despite the use of newspapers to reveal plot lines in several scenes the method was ultimately unused for this announcement. The newspaper features a custom made cover which features imagery of Monty Brewster (Richard Pryor) and his opponents Heller (Milt Kogan) and Salvino (Carmine Caridi) with the headline 'NONE OF THE ABOVE WINS' and a small news story underneath. The remainder of the prop is made up of a period USA newspaper which is dated 1984, the year in which production took place.

The newspaper measures approximately 15" x 11.5" when closed and remains in excellent production made condition with some edge wear and toning, overall fine.

A displayable artefact from the production of the memorable Pryor comedy.