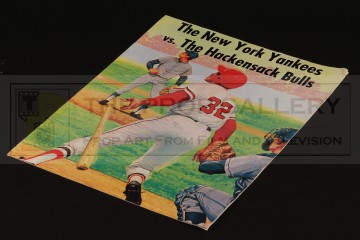 An original prop used in the production of Brewster's Millions, the 1985 comedy starring Richard Pryor and John Candy.

Baseball programmes such as this can be seen used by attendees of the exhibition match between the New York Yankees and the Hackensack Bulls organised by Monty Brewster (Richard Pryor). The front cover of the programme features the name of the competing teams with an illustration of a ball game while the interior pages are unrelated text with two scorecards to the centre, the rear cover features the respective logos of the Yankees and Bulls.

A displayable artefact from the production of this memorable Pryor comedy.