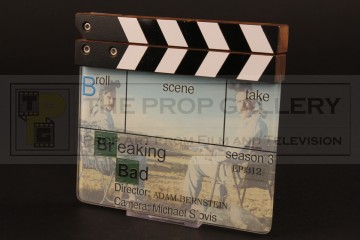 An original clapperboard used in the production of Breaking Bad, the hit crime drama series created by Vince Gilligan.

This original production used clapperboard is constructed from translucent perspex with an affixed wooden clap stick and an applied front printed graphic to the verso of the slate which features the famous stylised series logo and the name of director of photography Michael Slovis with spaces to record the roll, scene and take numbers. The B camera board also features background imagery from the series with an applied sticker from its last use on episode 12 of season 3 and a further sticker printed with the name of director Adam Bernstein. Similar digital versions of these clapperboards can be seen used in behind the scenes footage.

An exceptionally displayable example of the iconic clapperboard from this highly regarded television series.