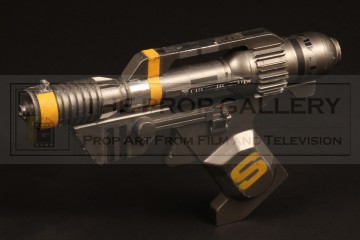 This Scorpio pistol was custom made by noted prop maker Bill Pearson for use during series four of the show but was ultimately not used on screen. The static prop weapon is constructed from mixed materials with a wooden handle and plastic barrel finished in silver paint and dressed with various kit parts and tape. This is subsequently believed to have been used in the BBC science fiction comedy series Galloping Galaxies! which aired in 1985/86.

The weapon measures approximately 10.75" long and remains in used condition with some obvious repairs to the barrel and minor paint wear, otherwise good.

A displayable artefact from the production of this cult science fiction series.