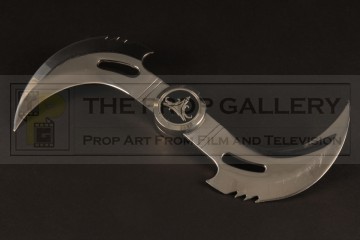 An original prop used in the production of Blade II, the second instalment of the popular Blade trilogy starring Wesley Snipes under the direction of Guillermo del Toro.

This is an original glaive weapon as used by Wesley Snipes as the title character in various scenes, notably as he does battle with vampires at the beginning of the movie. This is a hero version of the weapon intended to be seen in extreme close up while lesser quality rubber versions were used during the action sequences for safety reasons, constructed from polished metal the glaive features two curved blades with partially serrated edges and a logo to the centre where a locking mechanism allows one of the blades to be folded inwards when pressed.

The glaive measures approximately 10" long and remains in excellent production used condition exhibiting some minor surface wear from use and handling, generally fine.

A recognisable and highly displayable principal character artefact from this celebrated franchise.