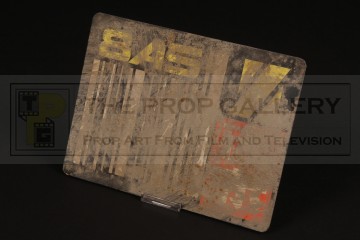 An original licence plate used in the production of Blade Runner, the 1982 science fiction classic starring Harrison Ford under the direction of Ridley Scott.

Licence plates such as this were created by the production to adorn the various vehicles seen in the dystopian city of Los Angeles throughout the film, constructed from metal with an applied printed decal its futuristic design includes symbols with a barcode and features the designation '8A5', the plate has been heavily weathered with dirt to have a well used appearance, to the back it features some adhesive residue.

The licence plate measures approximately 8" x 6" and remains in excellent production used condition with some light surface rusting, most notably to the verso, overall fine.

An incredibly rare and highly displayable artefact from one of the all time classics of the science fiction genre.