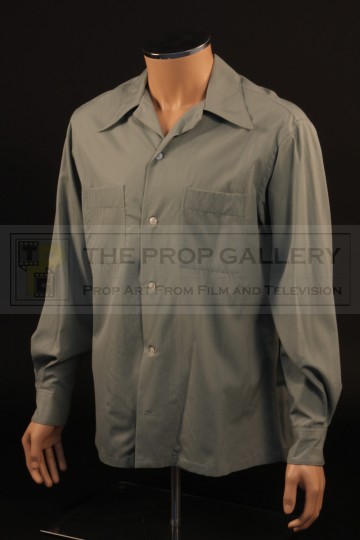 An original costume used in the production of Birdman or (The Unexpected Virtue of Ignorance), the 2014 picture starring Michael Keaton under the direction of Alejandro G. Inarritu.

This shit was custom made for the production by CEGO shirt makers of New York for use by Michael Keaton as Riggan who can be seen wearing this style of shirt in climactic scenes leading up to him shooting himself on stage. Constructed from green cotton the shit features a distinctive collar with two pockets to the chest and the original CEGO makers label to the interior collar, a further label below this is printed with the date 'APR 13'.

The shirt remains in excellent production used condition throughout with no visible damage, exceptionally fine.

A very rare example of principal character wardrobe from this highly regarded picture which was the recipient of four Academy Awards.