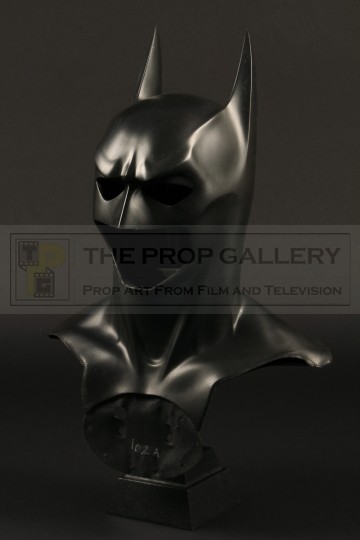 An original cowl used in the production of Batman Forever, the 1995 superhero picture starring Val Kilmer as the caped crusader.

This is an original cowl custom made by the production for Val Kilmer as Batman, constructed from foam rubber the iconic cowl features cut outs for the eyes and mouth with the trademark pointed ears. The cowl extends to a chest section designed to hold the emblem which is hand inscribed '102A' and features velcro to the underside used to secure it to the remainder of the costume with glue residue also present confirming its use during filming, this cowl can also be screen matched to the one seen next to Robin's costume in the Batcave.

The cowl is presented on a custom shoulder form with the interior of the head supported for display and stands approximately 21" high, it remains in excellent screen used used condition, very fine.

An instantly recognisable and highly displayable artefact from this classic superhero franchise.