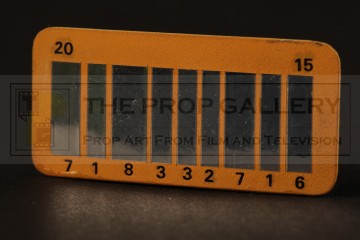 This futuristic miniature licence plate was constructed by noted effects house Industrial Light and Magic for one of the numerous miniatures used in the Academy Award nominated visual effects sequences. The small scale plate is intricately constructed from plastic sheet with an orange paint finish and features an applied reflective silver barcode and number decals for the registration and the year 2015 to the top, to the verso is a quantity of dried glue indicating its use on one of the miniature vehicles.

A displayable miniature artefact from this classic science fiction trilogy.