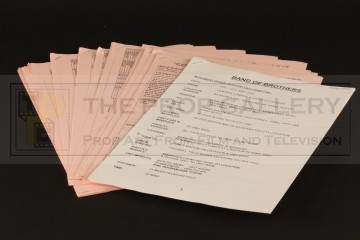 An original clapperboard used in the production of Band of Brothers, the 2001 American war drama series which saw Steven Spielberg and Tom Hanks collaborate as executive producers.

This extensive collection of seventeen production used call sheets offer a behind the scenes look at the filming of the series with each of the documents listing in detail the plans for a given days filming. The call sheets are on pink paper with vast majority running several pages and many featuring detailed maps of filming locations, they are dated between Monday 3rd April 2000 and Thursday 25th May 2000. The collection of call sheets is also accompanied by a five page movement order dated 30/04/2000 which contains numerous directions, each of the documents remain in excellent production used condition with some exhibiting minor soiling and edge wear, overall very fine.

A fine collection of original production material which offers an interesting behind the scenes look at this highly regarded series.