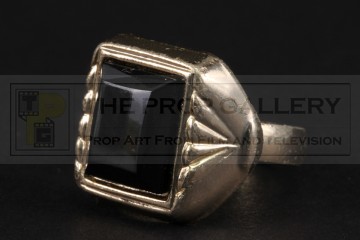 An original prop used in the production of Austin Powers in Goldmember, the 2002 action comedy starring Mike Myers in the title role.

This pinky ring can be seen worn by Michael Caine as Nigel Powers throughout the movie. Constructed from soft metal with a faux black jewel the ring measures approximately 1" x 1" and remains in excellent production used condition with some light surface wear.