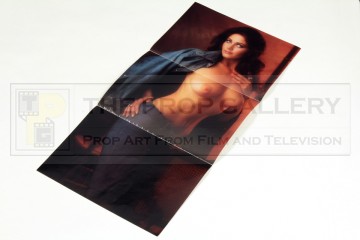 This prop Playboy centrefold was custom made for the production and features actress Lynda Carter of Wonder Woman fame. Carter was originally cast in the role during pre-production of the movie and travelled to the Philippines for location filming which was halted in late May 1967 when Typhoon Olga destroyed the sets, by the time production was ready to continue Carter was contracted to film Wonder Woman and could not return to the picture meaning Colleen Camp was cast as Miss May in her place. This necessitated the creation of a new centrefold so Camp was shot in a similar pose wearing the same shirt to avoid any continuity errors which may have crept in given that Coppola has shot some footage of the boat during the production hiatus and indeed the final screen capture presented here clearly shows the original Lynda Carter centrefold on screen.

The centrefold is printed in the typical manner with a large image of a topless Carter and the traditional Playboy party jokes and other content to the verso, it measures approximately 23" x 11" and remains in very good original folded condition with some minor fold line wear, overall fine.