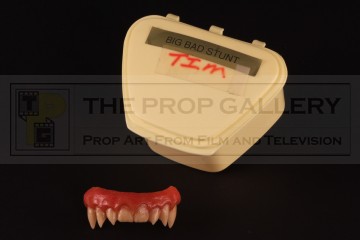 An original prop used in the production of Angel, the American television series and Buffy the Vampire Slayer spin-off created by Joss Whedon.

Fangs such as this were created by the production for use by actors portraying the various vampires which appear throughout the series. The acrylic constructed dentures are designed to replace the actors upper teeth with fangs for filming and are presented in the original production used denture box. The box features an applied piece of gold tape which is type written 'BIG BAD STUNT' indicating they were for use by a stuntman standing in for a series villain with a further piece of tape below hand inscribed 'TIM', the name of an unknown stunt performer.

An affordable and relevant artefact from this well received series.