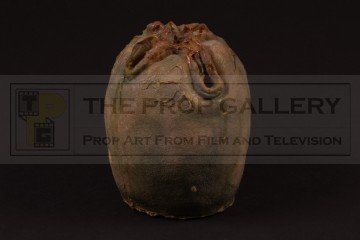 An original miniature used in the production of Aliens, the second instalment in the popular Alien film franchise directed by James Cameron.

This miniature alien egg was used during the production of the visual effects sequences produced by a talented effects team which included Robert & Dennis Skotak, Stan Winston and John Richardson. The destruction of the egg chamber was realised by a combination of live action and complex miniature effects which employed every trick in the book to produce a sequence where the two methods are virtually indistinguishable on screen. The egg is constructed from foam with a thick latex covering which has been dressed, hand painted and weathered.

The miniature stands approximately 6" high and remains in excellent production used condition, soft and supple to the touch exhibiting some minor paint wear. This represents an incredibly rare authentic example of these heavily replicated miniatures from this special effects triumph which won the Academy Award for Best Visual Effects.