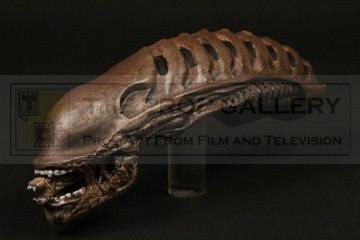 An original prop from the production of Alien³, the 1992 science fiction horror directed by David Fincher.

This is an original production made head for one of the third scale alien rod puppets developed by Amalgamated Dynamics and shot by Boss Films under the supervision of Richard Edlund. The head is constructed from resin and features a separate inner jaw with square mounting point to the underside, hand finished in a weathered dark brown paint which was possibly executed post-production.

An instantly recognisable and highly displayable artefact from the classic Alien franchise.