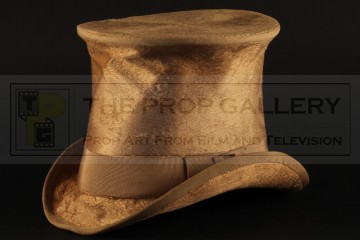 An original costume used in the production of Doctor Dolittle, the 1967 musical directed by Richard Fleischer.

This top hat formed part of the costume worn by legendary English actor and director Richard Attenborough as circus owner Albert Blossom. The uniquely designed gold coloured silk shag top hat features an upturned brim with a darker band and features the character name 'BLOSSOM' hand inscribed to the top of the white satin lining, this hat was for use with Attenborough's first costume change and can be seen on screen as he and Doctor Dolittle (Rex Harrison) first meet and likely not worn in the subsequent dance sequence due to its energetic nature.

The hat stands approximately 8.5" high and remains in very good vintage condition exhibiting some wear from production use and age.

An extremely rare example of principal character wardrobe from this classic American musical.