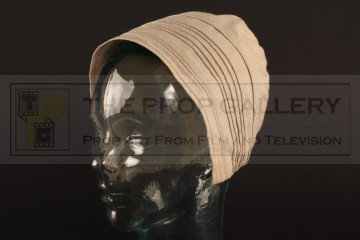 An original costume used in the production of The Crucible, the 1996 drama picture based on the play penned by Arthur Miller.

This coif was worn on screen by Winona Ryder as Abigail Williams and can be seen prominently for the first quarter of the movie. Constructed from cotton with pleat detail the coif features a hair clip and a number of thread hooks to the interior to aid the securing of the costume piece to the head, it remains in excellent production used condition throughout, very fine.

A rare example of principal character wardrobe from this Academy Award nominated production.