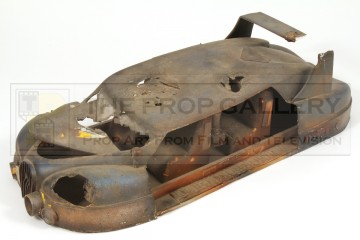 An original miniature used in the production of The Fifth Element, the 1997 science fiction picture directed by Luc Besson.

This is an original miniature fabricated by Digital Domain who realised the futuristic city we see on screen using a combination of model miniature effects and computer generated imagery. These anti-gravity vehicles were visioned by production designer Dan Weil and art director Ira Gilford and produced primarily as 1:24 scale miniatures for use on the miniature city set, for close up shots a minimal number of larger 1:6 scale hero miniatures were constructed and filmed using motion control, these included three versions of Korben's (Bruce Willis) taxi and one principal police car which was duplicated on screen using multiple passes.

This distressed car is clearly seen on screen as the police hunt for Korben following the memorable chase sequence, fabricated from styrene this miniature began life as one of the body shells intended for use on the hero 1:6 scale Korben Dallas taxi filming miniatures. This unused shell had already been finished in yellow paint but was subsequently distressed for use as the crashed vehicle, this included removing numerous sections of the body and mounting the top half on a wooden base with the addition of various details to give it a differing appearance, most notably a large spoiler to rear and headlights to the front. To the interior the vehicle features seats sculpted in foam which are visible through the partially removed shell and is finished in a combination of blue, grey and red paint to appear damaged and rusty.

The miniature measures approximately 34" long and 15.5" wide, it remains in excellent screen used and distressed condition with some paint loss revealing the original yellow paint below and lacking a piece of the spoiler.

Please note that due to the large scale of this miniature special shipping arrangements will apply, we therefore recommend that any shipping queries, particularly those of an international nature, are discussed before purchasing.